(The original Finnish version was published in the online newspaper Uutiskynnys on 6 September 2010.) 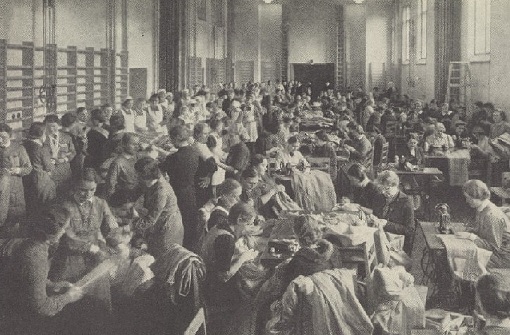 ”What we did back then would almost be considered illegal child labour today! Unicef’s Convention on the Rights of the Child didn’t exist and even if it did, it would have still been clear to all of us mothers and daughters that everyone must do their part. I garnered cones which we used as firewood, and I also picked bones for boiling soap.”

This remembrance was written by the former defence minister Elisabeth Rehn for the foreword of the 170-page-long book titled Me puolustimme elämää – naiskohtaloita sotakuvien takaa (in English: We Defended Life – Women’s Destinies Behind War Photos). It was published in August and includes 200 photographs. The book deals with the experiences and motives of Finnish women of the wartime. Its actual writers are John Lagerbohm, Jenni Kirves and Olli Kleemola. Uutiskynnys interviewed Kleemola concerning the book.

TT (Uutiskynnys/Tuomas Tähti): Plenty of miscellaneous books on Finland’s wars have been published in the past years. What is special about this particular book?

OK (Olli Kleemola): Me puolustimme elämää is probably one of the first books that discuss extensively the women’s situation in wartime and highlight that women were in charge of all kinds of tasks; they were not just Lotta Svärd members. The book also underlines how significantly women kept the society together. Especially the chapters written by Jenni Kirves talk about how love had a protective mental effect for soldiers in the front. Women – as well as children, of course – were the embodiment of everything that men were fighting for. John Lagerbohm, in turn, emphasizes the strength of women when they faced the most brutal sides of war. Humour was remarkably important in maintaining the stamina, and the book also pays lots of attention to that.

TT: You have been studying history for years and your collections include about 10,000 photographs from the wartime. What new thoughts crossed your mind while making the book?

OK: Although I had previously provided some war books with photographs, this was the first time when I also participated in writing that kind of a book. The process made me have a higher regard for how women worked on difficult tasks without complaining much.

TT: The chapters that you wrote are telling a quite traditional story of women’s life in wartime. What do you want to express with these writings?

OK: Even if women were much more than just sufferers and workers, those are still roles that shouldn’t be ignored. The common intention of us, the writers, was to create an all-round book.

TT: Was the women’s situation during the Continuation War different from that of the Winter War?

OK: The Winter War was essentially shorter; the society didn’t need women as workforce as widely as later on in the Continuation War. It was exactly the times of the Continuation War when it became clear that women have to do the jobs that men had traditionally taken care of, even harbour work and mining. But in the beginning of the war people kept on hoping that soldiers could come back for harvesting as early as in the end of the summer.

TT: Did the working of the women affect the post-war situation at workplaces?

OK: War is the ultimate state of emergency; it’s very different from normal life. People understood that there’s work that simply has to be done. In this sense it was natural that women replaced men at workplaces, but when the war was over, it felt reasonable that healthy men shall continue in their previous jobs. Perhaps you could say that the war marked an early spark for the change that was to happen in Finnish workplaces’ gender structure, but this change was anything but straightforward.

TT: What kind of audience is the book targeted to?

OK: Me puolustimme elämää is especially for those who want to get more information on this part of our war history that hasn’t been much on the frame. The reader gets familiar with this topic through pictures, but the book includes also writings, of course. A typical chapter has a few pages of length and discusses one precise issue. The book is also meant to honour all women who maintained the society during those hard years.

TT: How has the book been received?

OK: Personally I’m satisfied with the reception. The Great Finnish Book Club has chosen Me puolustimme elämää to be the Book of the Month and the book has also been displayed in various occasions. In the end of October the writers shall talk about it at the Helsinki Book Fair.

TT: Does the book have a message for the people of the present day?

OK: In wartime men and women were separated for long times, so the couples enjoyed even the shortest encounters. In overall, people cherished small and temporary enjoyments that we almost take for granted. Perhaps this would also be good for the Finns of the 21st century.